Home Sports ‘No wonder we got destroyed’: What it was like facing young Patrick... 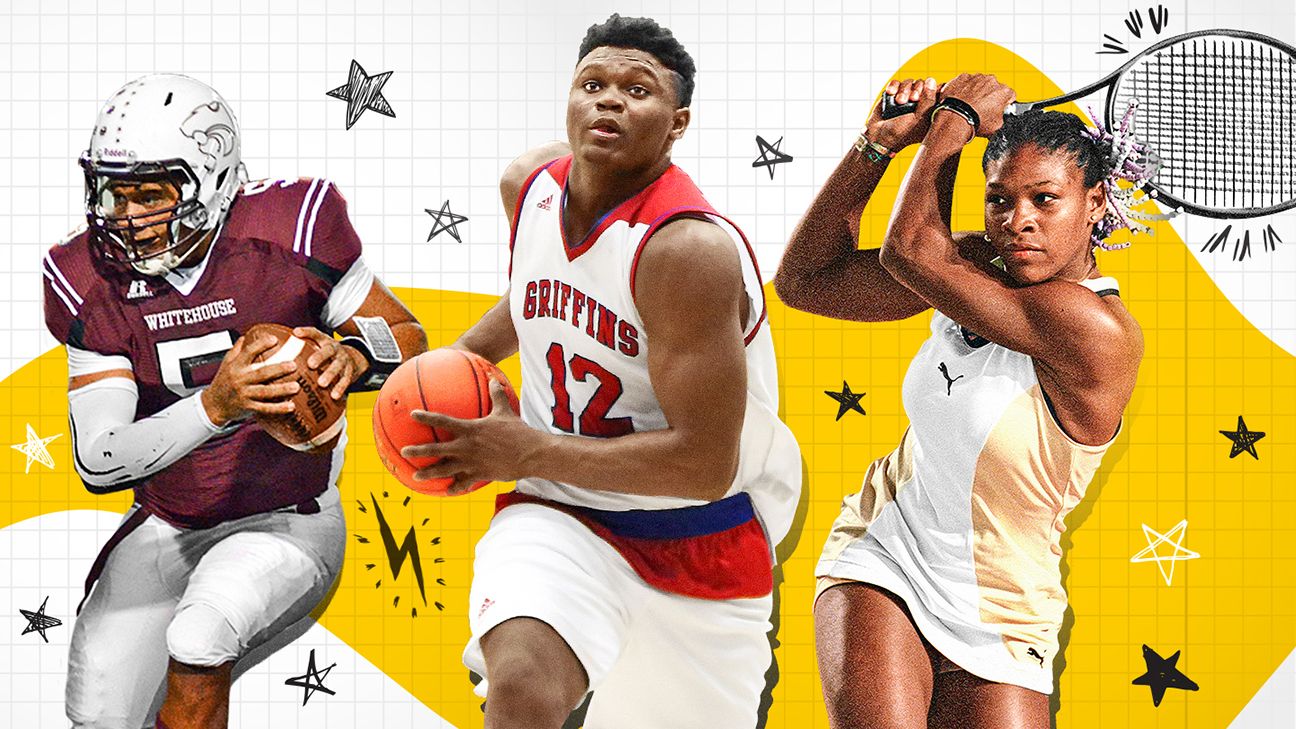 Before sports’ megastars won their 100th match on center court at Flushing Meadows (and she’s still on the quest for Grand Slam No. 24), made their NBA debut at age 19 after a stellar freshman season at Duke, signed the biggest contract in the history of sports (Hint: a 10-year extension with the Kansas City Chiefs at $477 million), they were kids, perfecting their zinger serves and dominating on the football field.

Facing stars in youth sports can be infuriating, liberating and wondrous. Unlike many stars who played at prep schools or elite athletic academies, Zion Williamson, Mike Trout and Patrick Mahomes played against regular high school opponents, and so the stories have become almost legends. Sometimes it’s a, “I played against Zion Williamson when he dropped 53 points,” fun fact. Sometimes it leads to a specific goal, like, “I want to see how I can get Serena Williams to make a forced error during this game.”

As Williams heads into the quarterfinals of the US Open and Mahomes prepares to take the field on the NFL’s opening night, here are some of the best stories from athletes who competed against today’s biggest stars:

This story has been shared so many times in New Jersey that it almost has a mythical quality to it.

Mike Trout hit the ball so hard it traveled all the way across the field they were playing in — the Millville baseball field — and landed in the second base of the junior varsity game happening in an entirely different field next to them.

In 2009, Charlton, an Egg Harbor sophomore, got into his school bus with a thought that many from high school to the big leagues have had: How do we make sure to not let Trout win the entire game on his own? Trout, then a senior at Millville, was a perfect baseball player (most players in the area — opponents included — already had news articles about Trout on their bedroom walls for inspiration), so no amount of strategizing was going to help.

Charlton heard his teammate and pitcher Brent Reale run his mouth as the bus pulled out. “I am going to own that guy today,” he said. Charlton turned around, looked at him and said, “All right buddy, good luck with that.”


In the first inning, Reale threw Trout a fastball up. Charlton was playing left field. Crunch. The noise of a bat making perfect contact with the ball. Within what felt like a few milliseconds, the ball had landed in the second base of an entirely different field, all the way across the varsity field. Charlton didn’t even have the chance to react. He just gaped.

“I couldn’t even be mad at that, it was so perfect,” Charlton said.

Millville won the game 7-5. The next time Charlton watched Trout was during batting practice, and a scout wanted to see him hit left-handed, just to see if he could ever become a switch-hitter.

Trout, now in his 10th season with the Los Angeles Angels, hit a left-handed home run on the first pitch.

Cardinal Newman’s Shane O’Connor had played Zion Williamson once before, in eighth grade, and even then, Zion, who was yet to go through his growth spurt (he was only 5-foot-10 at the time), was a stellar ball handler and finisher. He also had an everlasting smile on his face, like he was doing exactly what he was born to do: play ball. But when he walked out onto the court in his junior year in 2016, O’Connor was looking at a whole other Zion. This Zion was 6-7 and 260 pounds. O’Connor had heard teammates and rivals tell him through the offseason that Williamson had had a growth spurt, but this? This he was not expecting.

O’Connor has a distinct memory from the first quarter of that game: Williamson catching a fast break halfway through the first quarter and throwing down a 360-degree dunk. His nose was at the rim of the basket. That’s when it hit O’Connor. “He is a different type of athlete. He is someone with special, special skills.” Zion scored 42 points in that game, taking Spartanburg Day to an easy victory. He regularly scored 40-plus points against other high schools. Kids at other schools would huddle around to watch new highlight videos of him, commenting on a chase-down-block he pulled out of the air, or an outlandish shot he made between the legs.

In the 2016 Chick-fil-A Classic, a high school showcase for teams around the Southeast, Zion beat the tournament’s record for points in a game (49) by scoring 53, 12 hours after the previous record was set.

“It was like he saw the record and thought to himself: I will break it tomorrow. And then went ahead and broke it,” O’Connor said.


Williamson was ranked No. 2 in his recruiting class, a local legend on the court, but what stuck with O’Connor and most of Zion’s rivals from high school was his ability to encourage himself and his teammates. None of them can remember a time when Williamson chided or talked down to anyone around him. It was like he had an unlimited supply of positive energy, and he took that with him to Duke, and now to the NBA with the New Orleans Pelicans.

The Arcadia Invitational, a high school track event, is known for record-breaking performances. For as long as Antonio Mitchell is alive, he will remember those 13 seconds at Arcadia in 2016. As a junior at Vista Murrieta (California) who played football and ran track, he hadn’t heard any particular details of Noah Lyles’ career other than that he was fast. He thought to himself, “How fast could he be? I’ll just run my best race.”

“I don’t know what his deal is, but he wouldn’t even warm up!” Mitchell remembered thinking.

When the gun went off, Mitchell was ahead of everyone else for the first 20 meters. Then, out of nowhere, Lyles took off, putting so much distance between himself and Mitchell that it didn’t seem real. He finished a 10.17 race, 0.44 seconds ahead of Mitchell, a Herculean feat in a 100-meter race. (For context: The usual time differences vary from 0.04 to 0.06 seconds between the top three.)

It was the most Mitchell had lost by in a 100-meters race. He was running, but he couldn’t stop staring at Lyles.

That same year, Lyles would compete in the United States Olympic trials, and while he failed to reach the Rio Games, he did win two gold medals in the World U20 Championships.

“It was unbelievable, really,” said Mitchell, who now runs track at Arizona State. “I couldn’t be mad because he was just that much better.”

“Now, every time I step on the track, I think to myself, ‘OK, I’ve competed against the best,’ and I don’t get nervous.”

When Kimberly Po woke up the morning she played 16-year-old Serena Williams for the first time, she didn’t know a thing about her. Unlike other athletes, Serena, who turned pro in 1995, didn’t play on the junior circuit. Po had only watched Serena hit with her older sister, Venus Williams, but that didn’t say anything about her shot selection, her competitiveness or her temperament during game play.

So, when Serena hit the first ball back and it zipped past Po, a straight cannonball of a forehand, she remembered thinking to herself, “Wow, at 16, she hits the ball faster than anybody I’d ever seen in my life.”

In her eagerness to hit the ball as fast as she could, Serena missed several times, her excitement palpable as she tried to smash every ball. Po decided the only way she, a veteran then, could beat this 16-year-old player who had hardly played competitive tennis was by returning as many shots to her forehand to get her to make an error.

“I could see her adjust — great players adjust within a match — and I was hoping that she wouldn’t adjust enough to take the second set,” Po said. Two years later, the two faced off again, this time at the 1999 US Open (which Williams went on to win), and Serena didn’t miss a single one of those shots. Winning a single point, let alone a game, was a challenge for Po.

“Before her, a lot of the girls that could hit the ball so hard were not very fast, so if you got could move them, you’d win the point. But she changed the game of tennis with her speed and power combination,” Po said. Then, Po was struck by her opponent’s mental game.

“I heard her talking to herself, sometimes when she misses a sitter, and you could hear her coach herself to feel a certain way,” Po said.

That was Po’s last competitive match.

“To this day, I have not seen a single player who would even come close to Serena in terms of her game, her strength and her longevity — there is none,” Po said.

Even before quarterback Patrick Mahomes’ threw his first pass in his varsity career, his rivals, including Jacksonville’s sophomore quarterback, Carter McCown, knew he had an “ungodly cannon” on his right side. He’s watched Mahomes play enough sports – basketball, baseball and football – to know that the skill and competitiveness Mahomes would bring to the game.

McGown’s meeting with Mahomes came when the future NFL MVP was a sophomore, and was back-and-forth and went to overtime. McCown, who would play junior college football, had the bigger game — he threw for 342 yards and four scores. But Mahomes, who threw for 240 yards, rallied to win 42-35, throwing his fourth touchdown in overtime.

After that game, Mahomes walked up to Carter and said, “Great game, man. I was impressed with how you carried yourself.” That’s when McCown learned something important about Mahomes: He is a constant student of the game. Mahomes is an exceptional athlete, but what makes him great is his ability to take notes from other athletes even when he is at the top of his game, McCown said.

In his sophomore year, Mahomes finished the regular season with 3,000 yards passing and 37 touchdowns. During Mahomes’ senior year, Whitehouse had a stacked roster — at least six players who would play FBS football — but Mahomes would compete in every game like his life depended on it — and every time.

McCown had other high school meetings with Mahomes, who would always win. McCown still marvels at what he saw and what he sees Mahomes, a league MVP and Super Bowl champion with the Kansas City Chiefs, do in the NFL.

“God bless that guy’s arm strength,” McCown said. “No wonder we got destroyed.”

Rapinoe was magnetic, her energy so distinct and potent that teammates, rivals and fans couldn’t take their eyes off of her. It’s been 17 years since Allison Graham played Rapinoe, but to this day, that’s what she remembers from the National Cup final her team, Peachtree City Lazers won against Rapinoe’s Elk Grove United. Graham, whose team was a year ahead, went into the game with a chip on her shoulder and zero knowledge of who Rapinoe was or what a global phenomenon she was going to become. She scored first, and immediately after, as if she’d pressed a button in Rapinoe’s competition machine, Rapinoe scored. But more so than the goal, what stuck with Graham was her celebration after.

“I remember to this day her running to her team’s bench and doing a little dance to celebrate,” Graham said. “And she actually had rhythm.”

Graham’s teammate, Kristen Rhyne, scored her team’s winning goal at the 73rd minute, giving Peachtree the championship, but even then, Rapinoe is a hustler, making them sweat for their victory.

“I wish I would have known what a world phenomenon she would end up becoming,” Graham said. “I would have made a point to watch more of her in the game and probably asked for an autograph.”

Rivalry game between Gophers, Badgers canceled due to COVID-19 outbreak