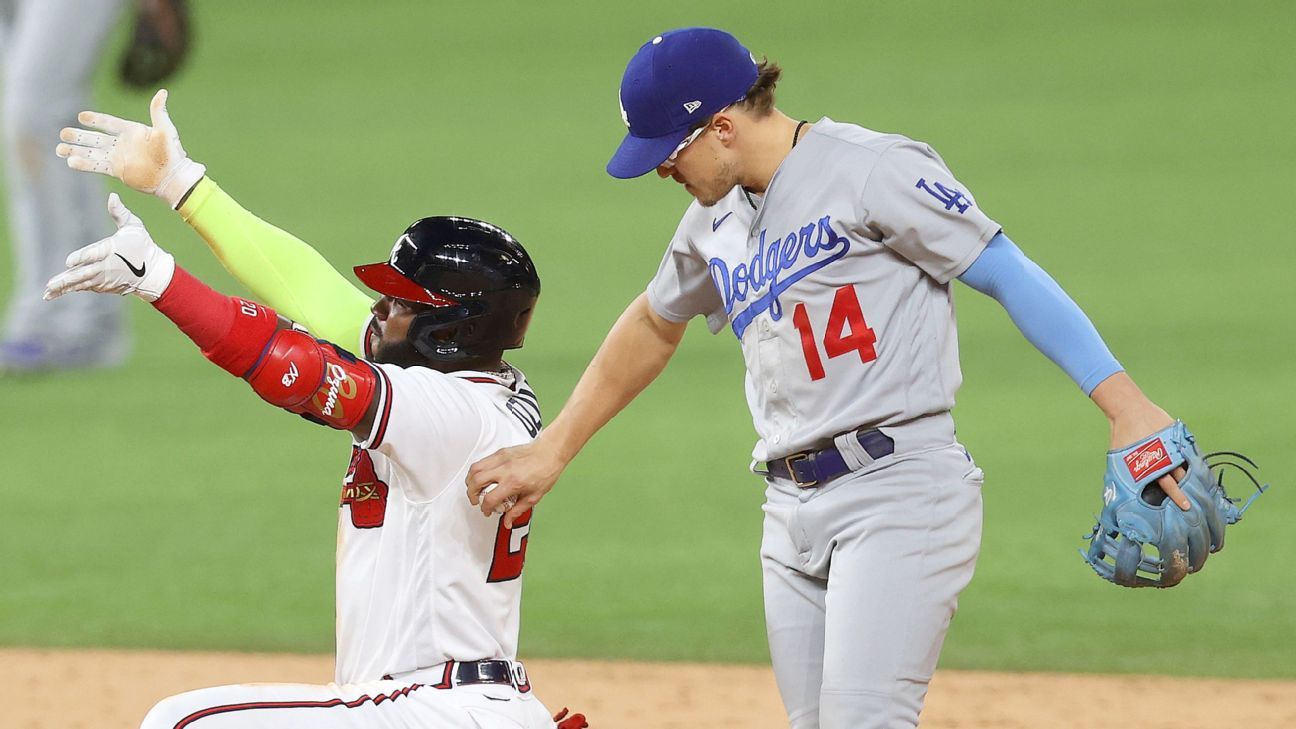 For the fifth straight day, we have a league championship series doubleheader. Welcome to the excess that is the 2020 MLB playoffs. This time, two teams face elimination as the Astros have their backs to the wall for the third straight game and the powerhouse Dodgers are staring at the prospect of having their season end at the hands of the Braves.

Here’s a breakdown of the games, some numbers to know, a hot take of the day and more as you prep for Friday.

All times Eastern; all series best-of-seven played at neutral sites

Obviously, the Astros burned through the bulk of their best relievers in Game 5 and closer Ryan Pressly has thrown two days in a row — although only 30 pitches. “This is the postseason. There are no off days,” he said. So he’ll be ready to go. Really though, Astros manager Dusty Baker isn’t in terrible shape. He can go Valdez to Cristian Javier and then to Pressly if needed. If somebody other than those three pitches, the Rays are probably scoring some runs.

The Rays, however, are hitting just .200/.285/.363 in the series. They haven’t been able to string together many rallies unless a home run is included. Indeed, 71.4% of their runs in the postseason have come via the home run. Home runs are good! But so are singles and doubles, and the Rays need a few more of those. Brandon Lowe did homer on Thursday, snapping a 1-for-33 skid, but that leaves his postseason average at .089. Willy Adames is hitting .118 in the postseason. The Rays need something from those two. Snell has gone 5⅔, 5 and 5 innings in his three playoff starts. In Game 1 against Houston, he allowed just one run, pitching around six hits and two walks even though he had just two strikeouts. He threw 105 pitches and had trouble putting Astros batters away.

Certainly, the Rays aren’t desperate yet. But, as was the case with the 2004 Red Sox against the Yankees, if Houston wins Game 6, it feels like all the pressure in Game 7 will fall on the Rays. — David Schoenfield

Just as expected, the guy with seven career starts and a 5.91 ERA outpitched one of the game’s legends, and Bryse Wilson‘s effort helped put the Braves one win away from their first World Series trip since 1999. Most importantly, Wilson went six innings, allowing Braves manager Brian Snitker to minimize his bullpen usage, a key for Game 5 since this will be an all-in bullpen game for the Braves. Given the extraordinary depth Snitker has, that strategy can work, although it helps knowing you have Max Fried in your back pocket for Game 6.

• Your guide to MLB’s bubble ballparks »
• ALCS preview: Rays vs. Astros »
• Astros?!? How angry should you be? »
• NLCS preview: Dodgers vs. Braves »
• Why Braves are big threat to Dodgers »
Playoff bracket, schedule and more »

As for the Dodgers, this must now feel like climbing Mount Everest without oxygen. I don’t know how fair this is, but we’re reminded of the extremely soft schedule the Dodgers played this season. Of their 60 games in the regular season, only 13 came against teams that finished with a winning record — 10 against the Padres and three against the A’s (they went 8-5). Even their wild-card series came against a sub-.500 Brewers team, then they beat a Padres team basically without its top two starting pitchers. As good as the Dodgers have been, they haven’t been tested until now — and now they’re in danger of being sent home with a big, fat “F” in this series (except for one inning).

I don’t know what Dodgers manager Dave Roberts’ pitching strategy will be, but it seems whatever he does with his bullpen — going back to the 2017 World Series — usually doesn’t work. He catches a lot of heat from Dodgers fans, and some of his decisions in postseasons past have been questionable, but this one has been on the players. It’s up to them, not the manager, to straighten this out. — Schoenfield

Updated odds for every series

Based on projections of ESPN’s Bradford Doolittle

Hot take of the day

Well, my baseball friends, this is now quite interesting. The Astros were the 39th team that trailed 3-0 in a best-of-seven series and became just the fourth to force a sixth game after Carlos Correa‘s walk-off home run off Nick Anderson in Game 5. Two of those previous teams (the 1998 Braves in the NLCS against the Padres and the 1999 Mets in the NLCS against the Braves) lost Game 6. The third team, of course, was the miracle Red Sox of 2004, who rallied to win four in a row against the Yankees in the ALCS. How big was Correa’s home run? If the Astros hadn’t scored in the bottom of the ninth, manager Dusty Baker said the Astros would have used Game 6 starter Framber Valdez in the 10th inning.

The MLB postseason is down to the final four. Here’s how they rank, each team’s strengths and weaknesses, and what they need to do to win it all. Power Rankings

Instead, Valdez is now rested for Game 6 and you can argue he gives the Astros the slight edge over Blake Snell, based on his performance in the postseason. The Houston bullpen — five rookies pitched among the seven relievers used in a bullpen effort in Game 5 — has held its own with a 3.71 ERA and has a higher strikeout rate in the series than Tampa’s pen (35.1% to 17.2%) along with a lower walk rate. The Rays are hitting just .200 in the series — and one guy, Randy Arozarena, has done most of the damage. In other words, several things are pointing in Houston’s direction and we’re two wins away from having a sub-.500 team in the World Series. Luckily, that won’t happen. The Rays win Game 6. — Schoenfield

Stat of the day

Bryse Wilson became the fourth rookie in the past five seasons to throw at least six innings and allow one or fewer runs in his postseason debut — and all four of them did it for the Atlanta Braves. Three (Wilson, Kyle Wright and Ian Anderson) did it this postseason, while Mike Soroka did it in the division series against the Cardinals in 2019.

The Astros aren’t done yet, whether the rest of the baseball world likes it or not. Houston staved off elimination for the second straight game, as Carlos Correa hit a walk-off home run to give the Astros a 4-3 win in Game 5 of the ALCS. The Rays’ Ji-Man Choi had tied the game with a solo homer in the eighth. Tampa Bay still leads the series 3-2. … In the NLCS, the kid outdueled the future Hall of Famer, with Atlanta’s Bryse Wilson getting the win and Dodgers great Clayton Kershaw taking the loss as the Braves secured a 3-1 series lead with a 10-2 victory.

Best moment of the MLB playoffs to date

The stage was set for another Fernando Tatis Jr. moment, but Cody Bellinger snatched it away. Bellinger’s home run robbery, plucking what would have been a go-ahead shot by Tatis in the seventh inning of Game 2 of the National League Division Series, kept the Padres at bay — barely — and will take its place in Dodgers lore, particularly if L.A. wins it all.

Randy Arozarena has gone from an unknown outfielder to this October’s breakout star. Going into the playoffs, you might have been asking, “Who is this guy?” But the Rays’ trade for him has been a huge factor in their postseason run. Arozarena went deep again Thursday in Game 5 of the ALCS, his third homer of the series giving him 13 since Sept. 1 (tied with George Springer for the most in baseball). And while his long balls have made a big impression, Arozarena also leads all hitters in the postseason with 43 total bases (and is leading in hits and extra-base hits). Also, he has been flashing some leather in the outfield and some sweet celebration dance moves on the field.