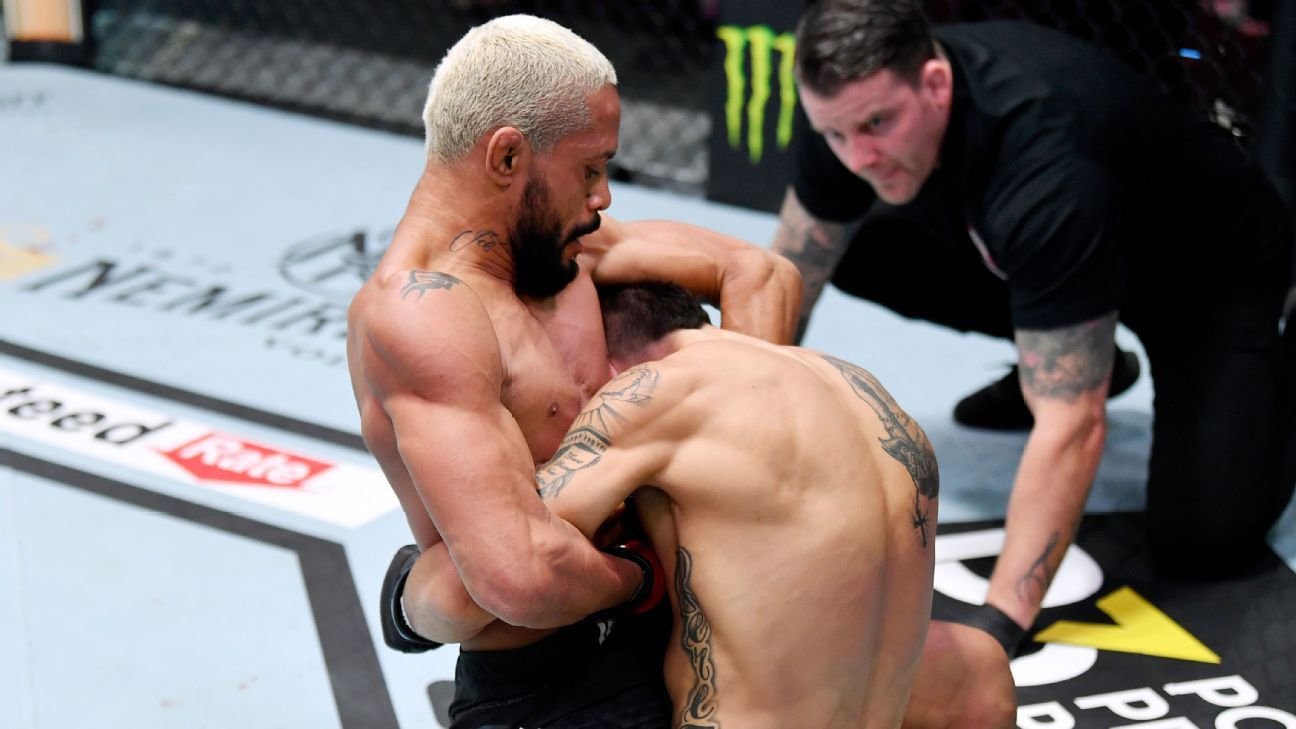 The UFC’s flyweight division, once maligned for having fighters too small and bouts that were too dull, has been completely turned on its head by the man nicknamed “God of War.”

Deiveson Figueiredo finished Alex Perez via guillotine choke at 1:57 of the first round Saturday night to retain the UFC flyweight title in the main event of UFC 255 in Las Vegas.

The incredibly fast, explosive Figueiredo found Perez’s neck in a scramble, locked in the choke and squeezed until Perez tapped out. It was Figueiredo’s first title defense.

In 2017 and 2018, there were whispers that the UFC could abolish the flyweight division. The UFC traded Demetrious Johnson, the greatest flyweight of all time, to Asia’s ONE Championship in 2018, seemingly signifying the final days of the division. But Figueiredo and his dynamic, all-action style has reinvigorated the 125-pound weight class.

Figueiredo vs. Perez was an absolute sprint. Perez landed a hard body kick and then shot in for a takedown on Figueiredo, who defended well. Figueiredo attempted to dive for a leg lock off the takedown attempt. Perez scrambled out of trouble, but in the transition Figueiredo latched onto a guillotine choke. It seemed like Perez was close to slipping his head out, but then had to tap.

After the victory, Figueiredo implored UFC president Dana White to make his next title defense against top contender Brandon Moreno, who beat Brandon Royval in the UFC 255 prelims.

“I want to face Brandon Moreno,” Figueiredo said. “Dana, make this happen. That’s the fight that I want to happen.”

The UFC 255 card took place in front of no fans at the UFC Apex, a facility across the street from the promotion’s corporate campus.

Figueiredo (20-1) beat Joseph Benavidez via first-round submission in July to win the flyweight title. It was his second straight win over Benavidez, but the title was not on the line back in February because Figueiredo missed weight.

Figueiredo, 32, has won five straight fights and is 9-1 in the UFC. The Brazilian slugger has 17 stoppages in 20 pro wins, flipping the notion that flyweights don’t finish fights on its head. This was Figueiredo’s seventh UFC flyweight finish, which ties Johnson for the most ever.

Perez (24-6) had won three straight and 11 of his past 12 coming in. The California native was filling in Saturday for the injured Cody Garbrandt, the former bantamweight champion who was supposed to move to flyweight and challenge Figueiredo at UFC 255.

Perez, 28, was coming off a first-round TKO of Jussier Formiga via leg kicks at UFC 250 in June.