Home Sports An ALCS comeback from down 3-0? Here’s why these Astros could pull... 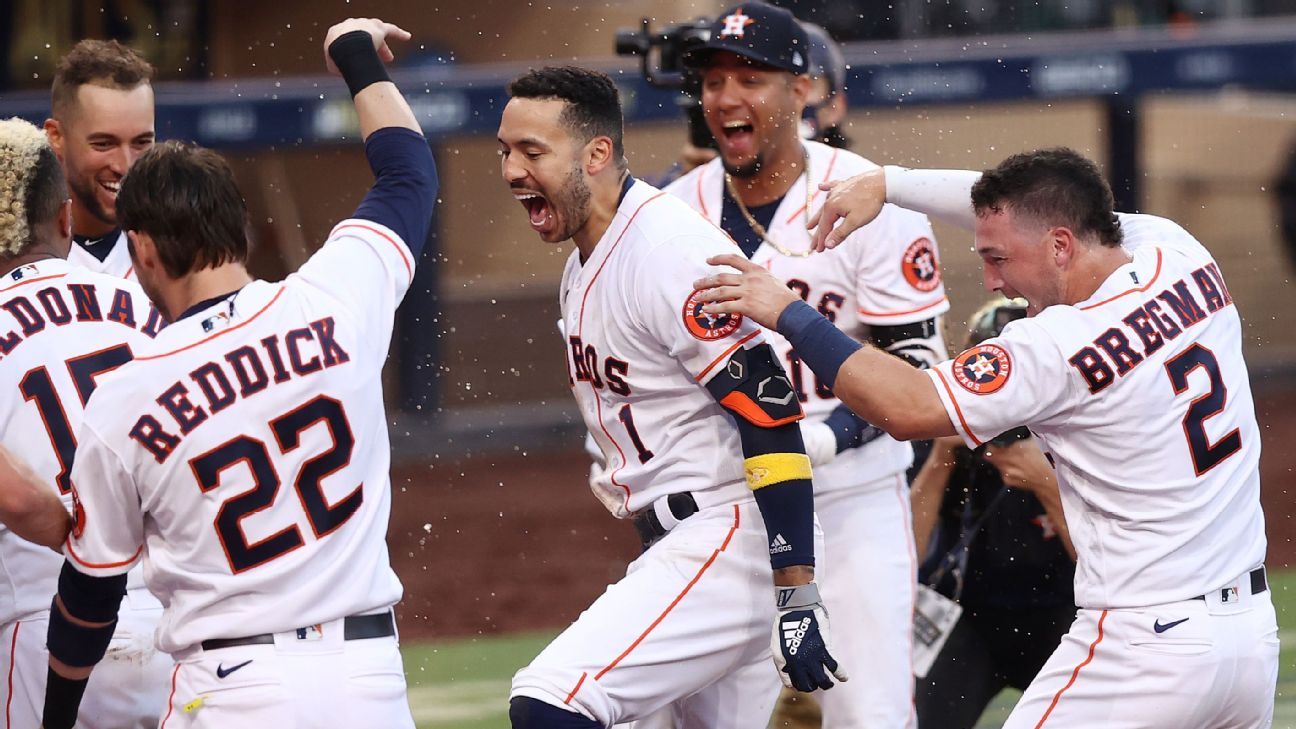 At the end of every day during the baseball postseason, I run a set of simulations to estimate the updated probabilities for each series and the ultimate outcome of the bracket. I add the newest results to a log and send them in to Bristol HQ, for inclusion in our ongoing coverage of the playoffs.

Here is the progression of the odds of the Houston Astros of winning the American League Championship Series against the Tampa Bay Rays, as well as the World Series, over the past eight days:

This is like that scene in a movie where a character is drowning — let’s call him “Astro” — and is pulled out of water by the hero, whom we’ll call “Dusty.” Dusty launches into some desperate CPR and starts pleading with Astro to wake up and looks to the heavens for a miracle, all while everyone else — Alex and Jose and Carlos and little Zack — stand around and watch the whole business in terror. Before long, reality sets in. It’s too late. Astro is not breathing. Astro is gone.

Then, all of a sudden, Astro spits up a whale’s spout of water and his eyes fly wide open and he gasps for air. Dusty rejoices! Alex and Jose and Carlos and little Zack dance in jubilation. Astro is very much alive.

What else can you say after Carlos Correa — who has nothing do with that protracted analogy above — visualizes himself hitting a home run, tells everyone he is going to hit a home run, then hits a home run to keep the Astros alive for another day? It’s fairy-tale stuff, though given the public approval rating of the Astros entering this postseason, it might be the kind of fairy tale where the prince ditches Cinderella and hits the clubs with the evil stepsisters.

That Houston has staved off elimination by winning back-to-back 4-3 games after tumbling into an 0-3 hole to begin the ALCS against Tampa Bay is not a matter of them coming to life, or the Rays seizing up in some kind of terrible choke mode. Basically, we’ve seen the same game play out five times in a row. The Rays happened to win the first three of them and the Astros the past two. It’s the sequencing that makes this so eye-opening.

Because of that sequencing, the Astros have already made history. Thirty-eight teams have fallen behind in a series 3-0. Four of them have forced a Game 6. The Astros are the fourth. Here’s the list of the others:

The Astros still have a long way to go before forcing their way into “Fever Pitch 2: Dusty’s Revenge,” but they have already ventured into territory where few 0-3 teams have gone. That’s pretty intense. But can they keep this going? Will they?

The answers: I don’t know and I don’t know. But there are a lot of factors embedded in the way this series has played out to suggest that, at the very least, the Astros have a real shot to do this.

Before we get into those factors, let’s pause for a needed reality check: You can see the probabilities in that table above. The Astros’ odds remain long. They remain long not just because they still trail the series 3-2, but because they are playing the Rays. The Rays entered this series as heavy favorites for a good reason: They have been a better team than Houston this entire campaign. They have gotten this far in the ALCS despite a number of their key hitters struggling because they have a roster of extraordinary depth and versatility. Before the game, Houston manager Dusty Baker even said that it felt like Tampa Bay has more players on its roster than his club.

Tampa Bay is still the favorite to win any individual game in this series. And since they need to win only one more game as opposed to the Astros’ two, the Rays are still in a very good position. Despite the devastating nature of watching Correa end Game 5 on a game-winning shot to center field, the Rays seemed nonplussed during their postgame Zooms. They praised the Astros and looked forward to having Blake Snell and Charlie Morton lined up for the next two games, if needed.

“It’s just been a tough two games, and hey they play good,” Kevin Kiermaier said. “We know we have a really good opponent over there, and we have to come out tomorrow early and often with the bats and let Blake do his thing, and try to get some runs for him.”

But if you live in Houston — and let’s face it, if you’re pulling for the Astros, you either live in Houston, have a relative in the organization or are really, really rooting for Dusty Baker, all good reasons — there are a number of indicators leaning your way:

1. Your team has already bucked history.

2. Their swagger is back.

Carlos Correa says he made in-game adjustments with hitting coach Alex Cintron before his game-winning dinger.

OK, I understand this is a serious intangible, old-timey sportswriter bromide. But it’s hard to miss. Having been around the Astros a good bit in recent years, one thing that always jumped out about them for me was the cockiness and confidence that marked the way they played and carried themselves. This year, they simply did not resemble that team. They looked like a bunch of guys late for a dinner reservation.

That changed once the postseason started, but as one break after another went the Rays’ way in this round, that fleeting quality of swagginess fleeted. There was a team meeting, which is more fodder for sportswritery bromides. But, hey, it worked, did it not? You don’t think swagger is a thing? Well, with the season on the line, Correa said he was going to hit a home run and then hit a home run.

What is that if not swagger?

Now, none of this is to suggest that the Astros believe in themselves more than the Rays. The Rays have flourished in obscurity for years, the best evidence for self-belief there is. This is more about the dynamic of the Astros’ clubhouse. When this team behaves like they have over the past couple of nights, they are awfully tough to beat.

3. They didn’t use Framber Valdez and have Lance McCullers Jr. lined up for Game 7.

The Rays have every reason to feel good about the pitchers they have lined up to start the next two games. And after Baker squeezed everything there was to get out of his bullpen on Thursday, while Rays manager Kevin Cash was able to get more length out of his relievers, Tampa Bay’s overall staff is in better shape heading into Friday.

But even as the Astros pulled out the win in Game 5, their pitching plans came very close to becoming scrambled. With the Rays trying to take the lead in the top of the ninth, with Mike Zunino starting the inning with a single and pinch runner Kiermaier reaching second base on a wild pitch, Baker had Valdez throwing in the bullpen behind closer Ryan Pressly. Pressly wriggled out of trouble without Baker having to dip deeper into his pitching depth. That’s huge.

“I said a prayer to my dad and my brother,” Baker said, recounting what was going through his mind as Correa strode to the plate before the game winner. “And I said, ‘Please, Lord let us walk off, because if not we gotta use Framber, and then we don’t have Framber tomorrow to start.”

Let’s not forget that Valdez and McCullers arguably outpitched Snell and Morton in the first two games of the series, though the Rays won both:

The key for Baker is probably length. Given the state of his bullpen after Games 4 and 5, he needs Valdez and McCullers to repeat their starts from earlier in the series. No easy feat — the Rays’ army of analysts is dissecting those outings as these words are typed — but if they can do so, Tampa Bay’s bullpen edge is minimized.

4. Their luck has turned.

One thing about baseball, you can say the breaks even out over time. But there is no guarantee that they will even out over the course of a short series. However in this case, it appears that things are already regressing to the norm.

Over the first three games of the series, the Astros’ hitters had about 33% more balls struck with an exit velocity of 80 mph or greater than the Rays. Their OPS on those balls was .836. The big league regular-season figure in that category was 1.052. (The Rays were at .977.) Over the past two games, that figure for the Astros is 1.152.

• Your guide to MLB’s bubble ballparks »
• ALCS preview: Rays vs. Astros »
• Astros?!? How angry should you be? »
• NLCS preview: Dodgers vs. Braves »
• Why Braves are big threat to Dodgers »
Playoff bracket, schedule and more »

The teams combined to use eight rookie pitchers in their respective most important games of the season. That’s mind-boggling. The oldest of the four rookies the Astros used (Andre Scrubb) is 25. He would have been 9 years old when the Red Sox pulled off their epic comeback.

I think because the Astros have so many familiar postseason faces playing in the series, people overlook just how much turnover they’ve had on their pitching staff since last year’s World Series. Houston had the third-youngest staff in the majors this season.

You think that group is daunted by the history of teams in an 0-3 hole? They don’t know the history.

It goes on: Houston’s hitters have 34 strikeouts and 17 walks. Tampa Bay’s have 57 strikeouts and 14 walks. Houston has an 8-7 edge in homers. Both teams have had 31 at-bats with runners in scoring position and produced six hits in those spots for a .194 average. Yet the Rays have outscored the Astros 9-3 on those hits. You wouldn’t light out for Vegas to bet on that trend continuing.

7. If momentum is a thing, the Astros have it.

It’s not just that they’ve won the two most recent games, it’s where they started from before those contests and the dramatic nature by which they played out. Houston is riding high.

The Rays remain the favorite. But there are lots of reasons to think that the Astros can pull off the miracle, and evidence to support them.

So many questions still unanswered with the Masters coming soon