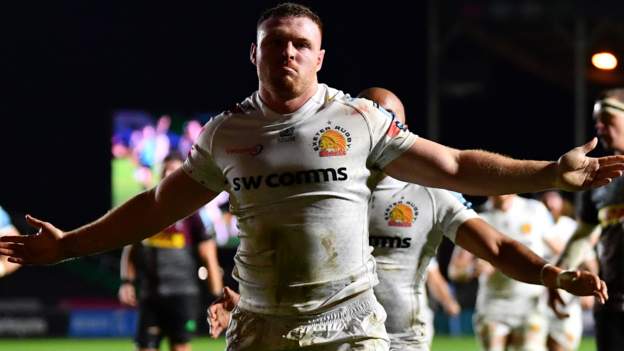 Sam Simmonds scored a hat-trick as champions Exeter Chiefs began their Premiership title defence with a comfortable victory at Harlequins.

Simmonds produced a superb solo finish in the first half before scoring from two rolling mauls late in the second.

Dave Ewers and Stuart Townsend also went over in a bonus-point win for the European champions.

Harlequins could only register a solitary Marcus Smith penalty which had put them ahead in the first quarter.

Despite being without seven internationals from their Premiership final win against Wasps 27 days ago, Chiefs still possessed too much power and precision for Harlequins.

It had been a cagey match until Chiefs scored three of their five tries in the last nine minutes to give the impression of a rout.

Brothers Joe and Sam Simmonds combined for the only try of an evenly-contested first half as the number eight found a hole in the Quins defence on halfway and out-paced the hosts’ back line, including winger Nathan Earle.

Neither side was able to completely gain the ascendancy until Chiefs’ business-like efficiency shone through in the last quarter.

They displayed all the hallmarks of the well-oiled defence and set piece that saw them win European and Premiership finals in October.

Ewers dotted down for their second try early in the second half at the end of a driving maul from a five-metre line-out.

Quins thought they had a way back into it when Luke Northmore went over, but his try was disallowed by referee Christophe Ridley for crossing by Alex Dombrandt, which impeded Chiefs centre Ian Whitten.

That proved to be the hosts’ most dangerous spell as eventually class told for Exeter, with Simmonds’ hat-trick score making sure of a bonus point before replacement scrum-half Townsend bagged a fifth in the closing moments.