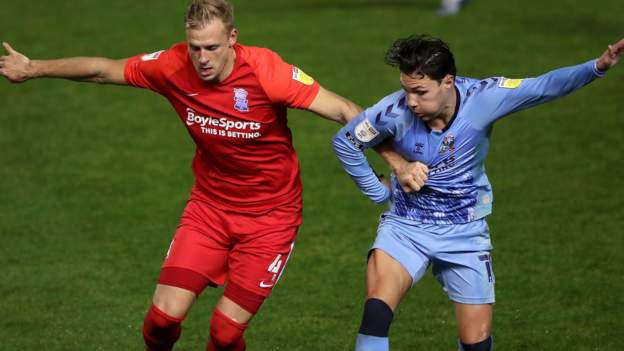 Coventry City and Birmingham City were kept goalless at St Andrew’s as the tenants v landlords derby ended in a 0-0 draw for the second time in 2020.

Birmingham striker Lukas Jutkiewicz came closest for the ‘visitors’ but a combination of goalkeeper Marko Marosi and the crossbar kept out his header.

This was actually the third draw between the two sides over 90 minutes this year, Blues having been held 2-2 by Coventry in the FA Cup replay in January, before winning on penalties.

But, in the end, the biggest cause of celebration from a well-contested but unexciting game was Coventry earning a first home clean sheet this season.

It was only the second clean sheet in total for Mark Robins’ side since returning to English football’s second tier for the first time in eight years as League One champions in June.

But, having conceded a league-high 23 goals in the Sky Blues’ previous 11 games, this deserved draw halted a sequence of two successive defeats for each side prior to the international break.

Birmingham are back in action on Tuesday with a trip to Luton, while Coventry play the following night, a home game against Cardiff City.

Covid: Risk of third wave ‘if we don’t get balance right’ – Raab